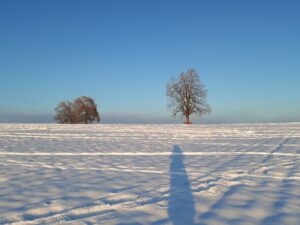 In the last blog I asked a bird’s eye view question. How do you see the development on earth in the last 50 to 60 years? Where do you see it going? BIRD’S EYE VIEW

Thank you very much for your rich answers. Now I have more questions, also after reading your comments:

I think it is still important to think deeply, intuitively, dreamily, also rationally about our existence and our future. At the same time, I am also aware that I am doing it from a privileged situation, as a Swiss and European woman, who at the moment neither lives in a war zone, nor is a refuge on the run, and has to be afraid of either being raped or drowning in the sea, nor lives in deep poverty. And at the same time, I am part of the development over the last 50 to 60 years and also responsible for it. Although I have been a consciously chosen a childless and vegetarian lifestyle and have since my youth observed the developments of our world critically, I have benefited a lot from the development of the last decades and contributed in a conscious and unconscious way to the chaos we are in now. I was free to do what I wanted, and even if the social structures were sometimes critical of such freedom, I found ways, as a woman, to evolve, to be adventurous and to feel relatively safe. This was still impossible for the generations of our mothers and grandmothers. Perhaps there were individual cases, like a Simone de Beauvoir or other women who were far ahead of their generation. I am very grateful for these freedoms and I also know that only a very small part of the world’s population can live like this, men included. But almost everything we get our hands on, every day, is fundamentally unsustainable and we live in an abundance that is no longer responsible. Many of us are waking up, grieving, confused, but also willing to change fundamentally. We need a more complex way of being, and also of thinking, so that we can become open to all human and earthly tendencies and also learn more and more to“relate“ to them. Most of you have talked about connectedness in your responses to the last blog, this deep cosmic feeling of oneness. Connectedness or unity can be an „incomprehensible“ concept, but it lives and yet manifests especially through relationships and in a deep felt curiosity and interest about other being(s). Reactive dominant behaviour in the face of uncertainty is not only very dangerous in our times, it has also become deeply boring – evolutionarily this attitude has worn itself out and is also slowly being seen through by many women and men. Humanity longs for other organisational structures where care and respect are considered self-evident values. Hierarchical structures, if healthy, can be helpful, but unhealthy controlling structures of many institutions that devalue human and non-human beings only to „bones and flesh“ or see them only as statistical figures in a two-dimensional film (digitalisation) are highly dangerous and such (de) valuations always ended in very tragic dead end roads in human history. We are challenged to think VERY CREATIVELY, OUT OF THE BOX and also to have the courage to do so! Is that possible? Or rather, if it is possible, how do we get there?

I end this blog with words from Vimala Thakar, whose perspective will also accompany me in this film project. She says in her book Spirituality and Social Action:

There is much unexplored potential in every human being. We are not just flesh and bones or a collection of conditioning. If we were, we would not have a very bright future on this planet. Life offers infinitely more than the material and the psychological. Anyone who lives with passion and dares to go beyond the fragmentary and the superficial to fathom the mystery of wholeness helps all humanity to realise what it means to be fully human.

All over the world we suffer from the darkness of the misery we have created. Because we have believed in the fragmentary and superficial, we have failed to live together in peace and harmony. Thus, a great darkness is spreading on the horizon and the threat of war overshadows all our lives.

In such dark times, ordinary people like you and me feel the urgency to go deeper and discard superficial, inadequate approaches in order to activate the creative powers that are available to each of us as an expression of wholeness. The immeasurable intelligence that guides the cosmos is accessible to everyone. The creative, intelligent energies and the everlasting light in our lives, can never be destroyed by darkness. In our ignorance, we may annihilate each other, but we can’t destroy the intelligence that is.